Thirty-one seconds of relative stillness seems like an eternity in a well-oiled screwball comedy & in George Stevens' impeccably crafted The Talk of the Town, the strangest thing happens about three-quarters of the way through. Fuddy-duddy law professor Michael Lightcap (Ronald Colman), understandably revivified by the attentions & stern rebuke of fireball Jean Arthur, decides to shave off his ridiculous beard & join the human race. His longtime valet, Tilney (Rex Ingram), begs him to reconsider, but Lightcap begins hacking off the upended intellectual pointy head just the same. And then this wonderful, giddy film grinds to a halt & the camera closes in on Ingram's marvelously expressive face for over thirty seconds. His face quivers slightly at first & we're not sure exactly why it's filling the screen. Is he going to sneeze? Yell? Blurt out a secret? And then his eyes become shiny, real tears form & he bows his head. For thirty silent seconds we watch his proud black face give way to despair while watching Colman blithely shave away his whiskers. So many curious, amazing things could be happening here, but it's never explained or remarked upon again. Obviously Tilney -- after happily attending to the professor all these years -- is as afraid of change as the Lightcap & he doesn't have a Jean Arthur to motivate him. And if he did, what would he change? Perhaps Tilney is saddened that no such spur-of-the-moment, impetuous change is even possible for him. It's difficult not to bring race into this scene, with the camera planted so long on Ingram's face, which fills the frame with pride & sorrow & regret. It's impossible not to think of a hundred other such images of black men consumed by sadness. The famous 1945 photograph of Graham Jackson playing "Going Home" on the accordion as the train bearing FDR's dead body leaves Warm Springs, GA  for Washington, DC, comes to mind, a strange mix of tribulation & symbiosis. An antic film about the human side of the law needed a scene like this to stabilize its more serious concerns. As charming as Cary Grant is in The Talk of the Town, he's so obviously a well-heeled actor ticking off the litanies of a mild-mannered revolutionary that the movie desperately needs some weight, and for thirty seconds, thirty beats of the heart, Ingram potently provides it. 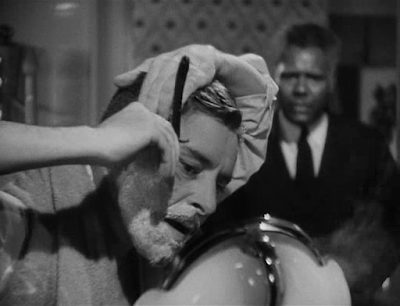 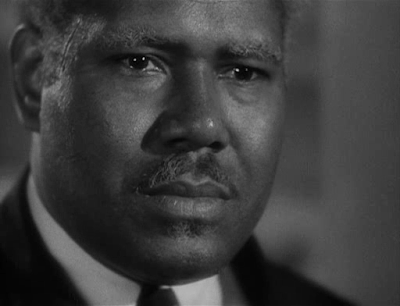 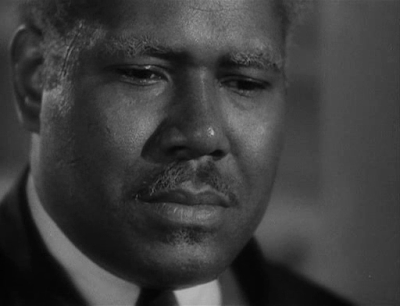 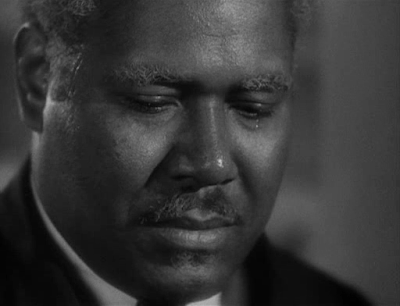 "That's a tip-off professor. You had to get good & sore before you got around to calling me by my first name. Nora, when you're angry, remember? Dilg is innocent, regardless of all the reasonable evidence dredged up by lawyers & that holy institution of yours. And I'd rather be hated by 40 frozen legal giants like you than turn him over to these bloodthirsty idiots of  Lochester! You were right to grow a beard. You're an old man, all your life. You put on the proper costume just as soon as you were able. Don't ever shave it off, Mr. Twilight, somebody might think you were alive & that would be misrepresentation." - Nora Shelley (Jean Arthur), The Talk of the Town

Posted by charles lieurance at 5:49 PM

Just before reading this I saw the scene... really a marvelous moment and, as you say, crucial to anchor the whole movie. Ingram has a gravitas that the two handsome leading men cannot approach. And he doesn't need a single word to do it. Lovely post, Charles, thanks...